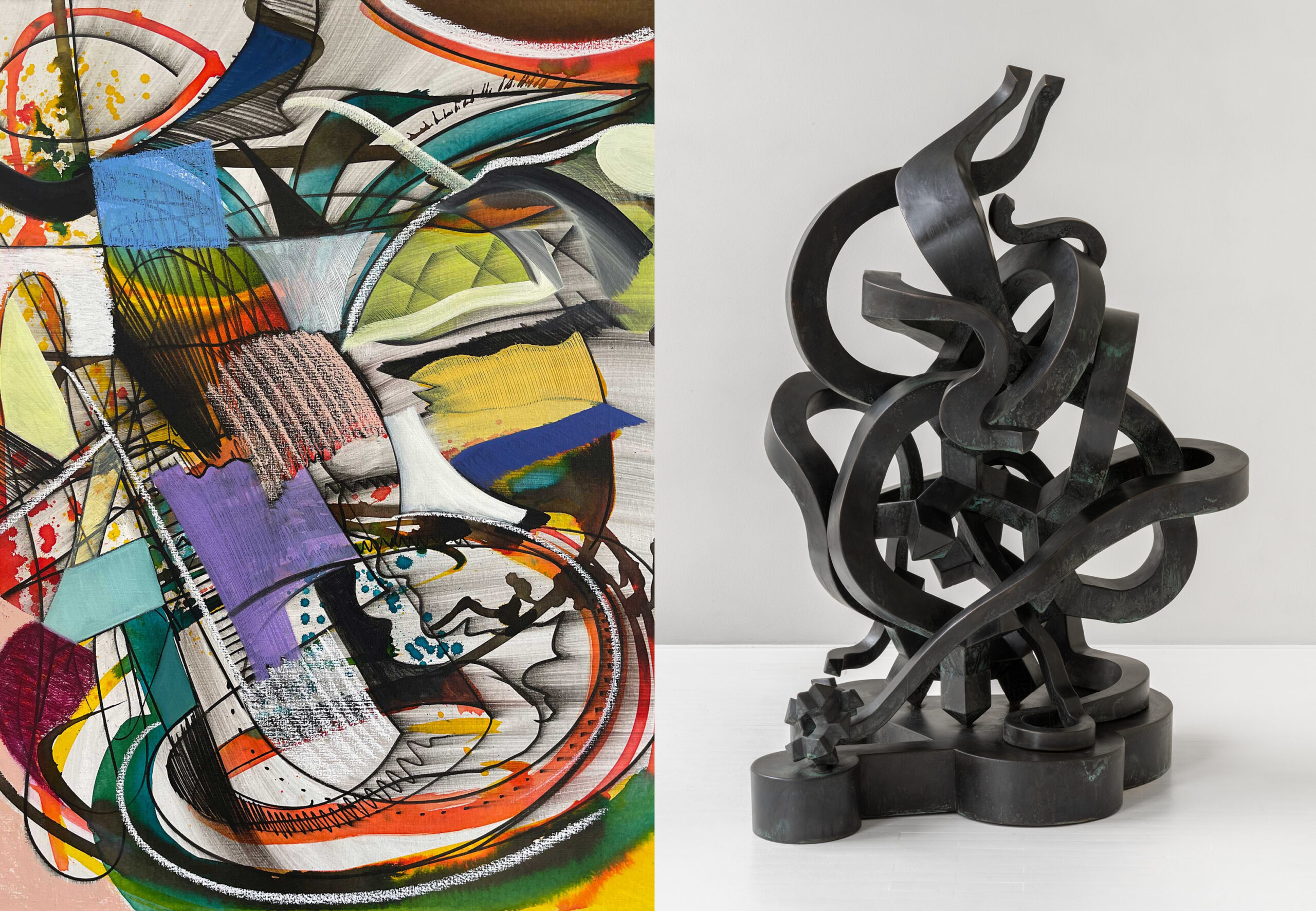 Martin Asbæk Gallery is proud to present the duo exhibition “Her Er” by Lars Nørgård and Kristian Dahlgaard. The two Danish artists have found stylistic common ground in their work with painting and sculpture, respectively. This alliance has resulted in an exhibition in which organic shapes, tangible or as illusions, weave in and out, taking up the walls and floors of the gallery.

In each of Lars Nørgård’s abstract paintings, a rip-roaring symphony of colors takes place. Nørgård paints resolutely and intuitively, and the works seem to be charged with this energy. It’s chaos, but a gentle chaos. Almost like through a kaleidoscope, our gaze moves across the surface and rarely attaches itself to the same place.

When nothing is recognizable, the focal points become changeable. No area is the center of attention, but they are all pivotal points. Electrifying, oscillating, the forms take turns occupying the foreground and background in Nørgård’s vivid wilderness. Depth is created, although neither space nor shapes can be identified. Besides the black marker which acts as a visual skeleton, the works emerge and develop in a constant dialogue between the artist and the existing shapes, colors, and surfaces.

Conversely, Kristian Dahlgaard works with a clear plan, and his bronze sculptures are meticulously engineered. First, they materialize as cardboard models and later as hundreds of bronze parts. The pieces of this three-dimensional puzzle are arranged and welded together, one by one. Oftentimes, a bronze sculpture is cast from a plaster original, but here it is carefully built up according to the model. It is craftmanship through and through, and the seemingly effortless twisting and turning does not arise as spontaneously as it may seem.

Once the work is completed, the process is practically indiscernible. The form has no beginning or end. It creates intricate patterns like a root and resists all chronology. Dahlgaard’s sculptures whirl – not around something, rather they are the whirl itself. Without a nucleus, without a front and a back. In a way, an infinity of sculptures exists in one of Kristian Dahlgaard’s. He makes full use of the spatial extent of the medium, all this three-dimensionality that defines its existence: the “here is” (in Danish: “her er”) of the sculpture, as Dahlgaard’s mentor and artist colleague Hein Heinsen puts it. The accentuation of the physical presence which gives rise to numerous, equally valid angles to experience it from.

Dahlgaard’s carefully designed sculptures come into being based on rigorous planning, while Nørgård’s paintings in turn are expressions of immediacy and stem from a momentary energy. The two artists can easily detect their affinities, nonetheless. While their approaches differ, their visual languages have distinct similarities; the fluid and the airy recur, either concretely or as expressions. Lars Nørgård and Kristian Dahlgaard come together in the kind of abstraction where the daydream thrives, and perspective never settles.

Lars Nørgård (b. 1956) has studied at the School of Design in Copenhagen and at the Academy of Art University in San Francisco, USA. Lars Nørgård is represented in numerous Danish art museums and has exhibited at various galleries and museums both at home and abroad throughout his career. Lars Nørgård has also completed a number of important public art commissions, such as the Copenhagen Opera, Aarhus University Hospital and the Technical University of Denmark.