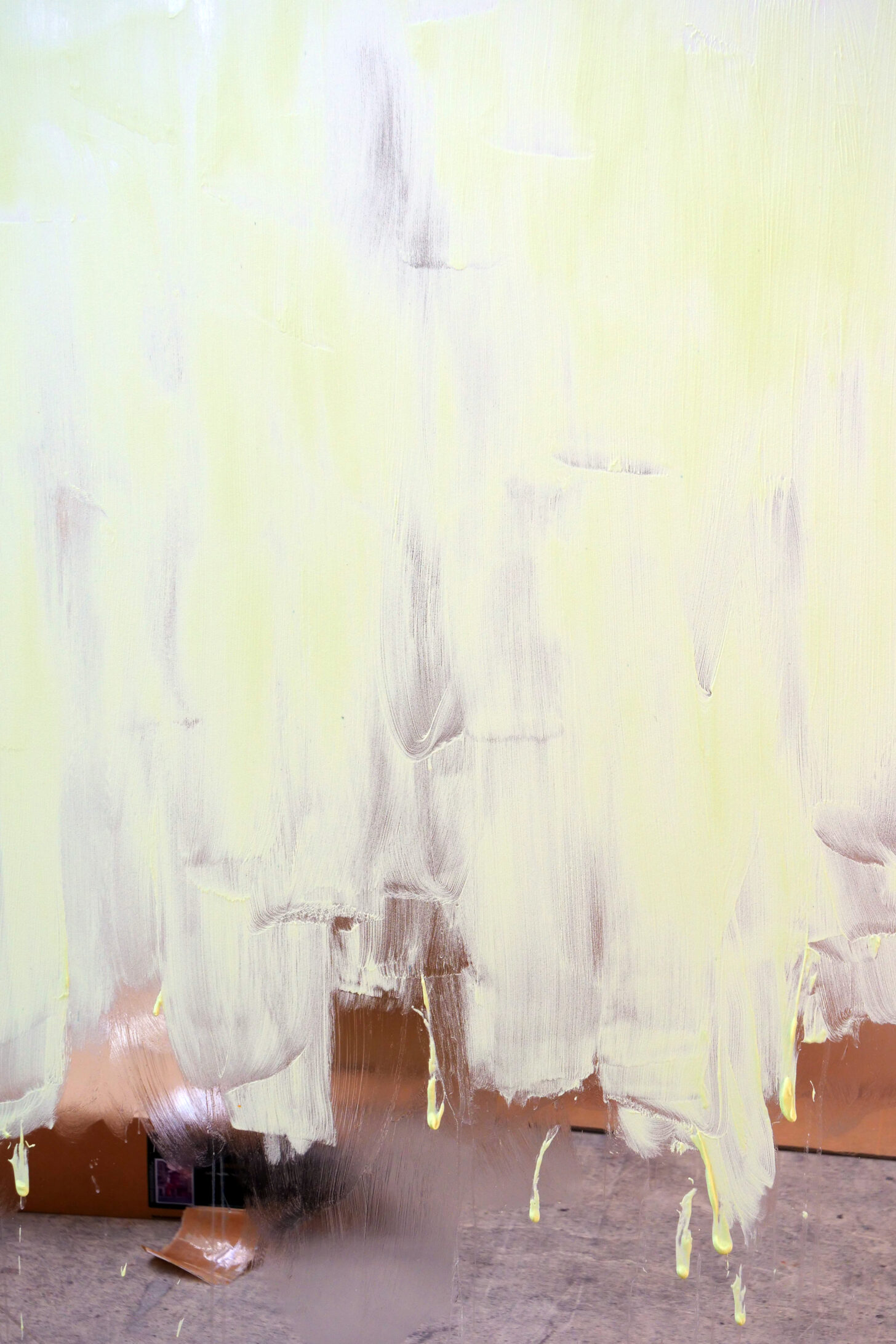 Martin Asbæk Gallery is pleased to present Pole Paintings, an exhibition by the Danish visual artist Peter Bonde (b. 1958).

Peter Bonde has transformed the gallery space into an installation consisting of a forest of monumental assemblages. Each work is a kaleidoscopic constellation that simultaneously points back and forth – back to a personal and material history, as well as forward to new possibilities, approaches and ways in which the work of art can unfold. Pole Paintings includes several of Peter Bonde’s distinctive components, such as his nonchalant brushstrokes with signature colors in shades of green and pink, fragments of pungent sentences, and mirror foil as a substitute for the conventional canvas, but the execution is different than previously.

Over the past year, Peter Bonde has collaborated with the Danish-Vietnamese artist Danh Vo, who has incorporated Bonde’s paintings as conceptual readymades in several of his installations, including one at last year’s Venice Biennale. In Pole Paintings, Peter Bonde recontextualizes his own paintings, serving as a statement following his role as a “ghostpainter” for Danh Vo. The visual culture is treated as a language in its own right; symbols, signs, and signifiers are absorbed and processed by all people – in fact, all people, as well as every category of things, are fundamentally eclectic – and the artist is someone who doesn’t settle on citing and making references but instead manages to create a unique expression, a personal aesthetic.

Peter Bonde has been a part of the Danish art scene since the early 80s, and under the influence of contemporary aesthetics, the unpolished and raw expression is unmistakably present in his works. But Bonde continues to explore new territories, and in his creative process, everything in the world can potentially be used as artistic material: he challenges and explores what constitutes a work of art – what the very act of creating an image entails. Peter Bonde is a visual artist to a greater extent than he is a painter, as the author Torben Weirup, who has written a monograph on the artist, puts it. Bonde strives to expand the field of visual art by incorporating elements that may not be expected or at least usually do not belong in painting, such as found objects or confrontational statements. It’s necessary to push the boundaries – which of course can have a provocative effect on some people – and this approach is an unambiguous gesture which deliberately does not uphold the traditions, but through its experimentation pursues the chaotic beauty of the unresolved.

Peter Bonde was born in Copenhagen in 1958. He lives and works in Copenhagen. Educated at the Royal Danish Academy of Fine Arts (1976-1982), later professor at the School of Painting (1996-2005). Recipient of the Eckersberg Medal in 2003, and awarded Statens Kunstfond’s Lifetime Achievement Award in 2011. Represented Denmark at the Venice Biennale in 1999 (with Jason Rhoades). Peter Bonde is represented in numerous Danish and international collections, including Statens Museum for Kunst, Copenhagen, ARKEN Museum for Modern Art, Ishøj, Kunsten, Aalborg, Can Elgiz Museum of Contemporary Art, Istanbul, Turkey, Kunstmuseum Wolfsburg, Germany.

We follow the Covid-19 regulations given by the Danish authorities.
As a further precaution, we kindly encourage everyone to wear a mask.